In the security industry, quartz sand gloves are popular and, accordingly, are widely used. They can both repel attacks and reinforce blows. A quartz glove is a leather glove with leather padding in the knuckle area. This padding is filled with quartz sand. Especially bouncers like to use these fighting gloves. But they are also considered a scene accessory in soccer and even police officers use them.

However, many people are not quite clear whether quartz gloves are allowed at all or whether there are restrictions when wearing and buying them. In the following sections of this article, we will tell you what you should look out for when buying and wearing quartz gloves.

In 30 seconds the most important thing:

Effect & use of quartz gloves

Quartz gloves are not so much for self-defense, because on the one hand you need to be in close combat and on the other hand you need to have strength to use them effectively. In the following, you will find more tips on the use of the gloves.

Structure of the gloves

Quartz gloves are gloves that are equipped with protectors both in the knuckle area and on the back of the hand. These protectors usually consist of a finequartz sand filling, but sometimes also of lead dust.

Often they also have an additional cut-resistant insert made of Kevlar. This means that even knife wounds can be repelled with the hand without causing a cut.

The skin of the gloves is usually made of cowhide. Depending on the model, they still have a lining that warms, so that the gloves can also be used in winter. The cowhide leather ensures a long durability

What are the benefits of quartz gloves?

The sand filling is primarily used to protect the hands from cuts that could be inflicted by a knife, for example, in the event of an attack. At the same time , however, the tactical gloves also strengthen their own punching effect through the reinforcement in the knuckles, in a fistfight.

When fist punches are made with quartz gloves, they have a much stronger effect – just like when using brass knuckles. For this reason, quartz sand gloves have both a protective effect and a reinforcing effect during attacks.

This is the reason why they are often worn for self-defense in critical situations, such as soccer matches or demonstrations.

Are quartz gloves suitable for self-defense?

This question can only be answered with “yes no“. Because it depends on the person:

Suitable for strong & nimble people as well as emergency personnel (bouncers and co.)

They can fend off the attack of knives better by sand gloves and also strengthen their attack in close combat. If you also have knowledge of martial arts, you can defend yourself against multiple opponents. Here it can be an effective self-defense weapon

Especially in the bouncer scene, they are therefore used. Because it happens quite often that bouncers are attacked with knives or other sharp objects. So they can fend off an attack, with less risk of injury. In the event of a necessary counterattack, the protective armor can also reduce the impact injury

Not suitable for weak persons without fighting experience

Weak people have to go into close combat with the combat gloves, which is completely unsuitable. This is absolutely not recommended, because without speed and strength, the gloves will not bring you anything.

Better suited hereare classic weapons for self-defense, such as pepper spray, a blank pistol or a stun gun. A pocket alarm can also be used to alert other passers-by to your situation.

The question of whether punching gloves are legal is asked very often. In fact, the gloves filled with quartz sand do not fall under the German weapons law. They are not a weapon in the sense of the Weapons Protection Act. The gloves cannot be considered as a cutting and thrusting weapon. For this reason, it is hardly surprising that the Federal Criminal Police Office has also expressly denied the weapons status of quartz gloves in a declaratory decision. Quartz gloves are therefore legal! However, you should keep a few things in mind:

As a result, it is legal to buy and own quartz gloves and you have nothing to fear in this regard in terms of weapons law.

But beware: use only in self-defense!

Therefore, as always: A self-defense weapon, an object, a combat glove or similar may only be used for self-defense!

But be careful, just because you are allowed to buy and possess something, it does not mean that you are allowed to carry (i.e. carry) the item with you all the time. This is problematic, for example, with knives (with a fixed blade over 12cm) or firearms (here you need a small firearms license)

Always tricky are public events that are subject to the Assembly Act (versammlG). Here is actually for all self-defense weapons a ban. You are not allowed to wear the gloves there either! The reason: They are suitable to “ward off the enforcement measures of a bearer of sovereign powers”.

At a concert, a soccer match or a demonstration, the lead gloves are therefore taboo.

When traveling, also keep in mind that the legal situation is not uniform internationally. In the European Union, there are generally no fundamental bans on quartz sand gloves, but there are exceptions in other countries:

If you want to buy quartz gloves, you have several options. Basically, there is no age limit for the purchase in Germany, because the gloves are not considered weapons.

Therefore, the purchase is theoretically possible even under 18. However, the gloves are usually only sold in gun stores where minors are not allowed to enter. This means that you will usually only be able to get sand gloves in stationary stores if you are of age.

The situation is somewhat different on the Internet. There are various online stores where quartz gloves are offered. To buy the batting gloves online, then usually no minimum age is required. Even on Amazon, many different models are offered. 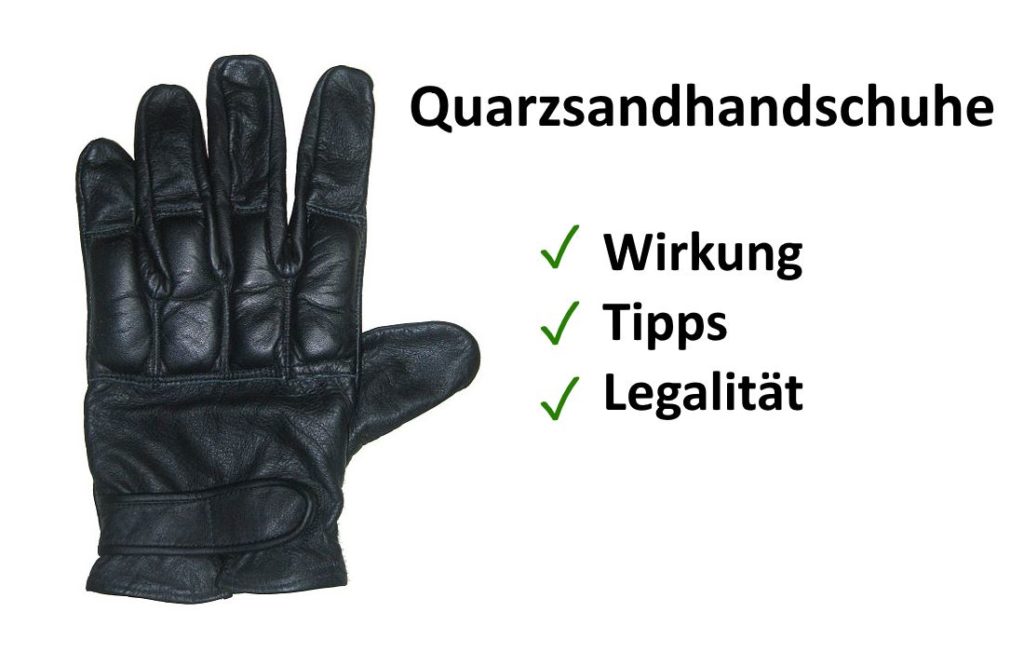 Where are quartz gloves used?

The gloves filled with quartz sand are most often used in the bouncer scene. The security guards use the garments to protect themselves from drunk and angry guests whom they deny entry. In addition, the batting gloves are also considered a real scene accessory in soccer and are accordingly often worn by soccer fans.

There are several names for quartz gloves. Among other things, they are also called impact-enhancing gloves, combat gloves, quartz sand gloves, lead gloves or impact gloves.

In general, this refers to a glove that is reinforced with quartz sand at the knuckles. Otherwise there are no differences. It’s best to first read through all the basics in our guide.

What to look for in cut protection?

So that the quartz gloves also help against an attack with a knife or sharp objects, you should attach importance to two things:

– High-quality workmanship of the cowhide skin or cut-resistant material such as Kevlar, this should not be too thin.
– All-round protection with quartz sand. So also in the palm and not only on the knuckles, otherwise you can “not reach into the knife” in an attack. Whether the palm is reinforced depends on the model.

The protection level of quartz gloves

The gloves have a protection level ranging from 1 to 5, with level 5 being the highest and level 1 being the lowest. If you want to be on the safe side, take level 5.

Attention: Our content has been carefully prepared, however, legal standards change and some are subject to interpretation. We can not guarantee the following information, for a legally sound advice please consult a lawyer. Status: 03/ 2020